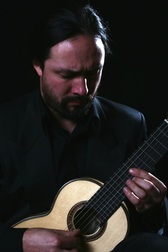 Guitarist, composer and philosopher. Parallel to their educational curriculum studied composition with Gabriel Matthey, then studies composition with Marco Stroppa at the Staatliche Hochschule für Musik und Darstellende Kunst in Stuttgart, Germany. As a musical performer has performed at various points in Chile and abroad, either solo, a member of duets, trios, quartets and other ensembles guitar as the group "Transient", with whom he premiered and recorded several musical works, some of their own authorship. As composer has several works premiered at important scenarios like the Teatro de la Escuela Moderna de Música, the GAM and the Sala Isidora Zegers from Universidad de Chile and has published a work under the label SVR.  He is a member of the guitar duo "Noesis", is founder and director of Consort Guitarrístico of Chile, with whom he has had important presentations, recordings (CD and television) and premieres of musical works nationally and internationally, as the concert in the 41 Weeks Music Frutillar 2009 and the concert at the XV Rencontre de Guitare de Nice clasique 2011. Has been rewarded with his group by the Consejo de la Cultura y las Artes for her contribution to chamber music 2009 and has obtained significant recognition through government projects.