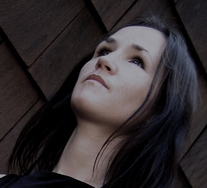 Anna Thorvaldsdottir is a prominent Icelandic composer, based in Reykjavik, Iceland and San Diego, CA, currently completing her Ph.D. in music composition from The University of California, San Diego. Her music is frequently performed in Europe and in the US, and her works have been nominated and awarded on several occasions, e.g. at Prix Europa in Berlin 2010. Rhízōma, Anna’s debut portrait album, will be released by Innova Recordings on October 25th 2011. The album features selected orchestra pieces and a solo percussed piano work, performed by the Iceland Symphony Orchestra and the Icelandic CAPUT ensemble, including Hrim (for chamber orchestra), which was awarded Composition of the Year (2010) at the Icelandic Music Awards 2011. Among upcoming events is the premiere of the orchestra piece AERIALITY, which will be performed by The Iceland Symphony Orchestra in HARPA, the new award-winning Reykjavik Concert Hall and Conference Centre, in November, conducted by Ilan Volkov.