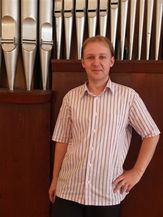 Dario Cebić was born in Zagreb. As a child he took piano, double bass and composition lessons. From 1990 until 1996 he was a member of Zagreb Ensemble and participated in numerous concert tours and competitions in Europe, USA and Canada. From 1994 he attended the Conservatoire Vatroslav Lisinski in Zagreb. In 2000 he was nominated for Porin Award in the music arrangement category. He studies double bass, musicology, piano, composition and music theory at the University of Music and Dramatic Arts Graz and composition at Franz Schubert Conservatory in Vienna. 2004 he won first prize at Competition in Austria. Since 2007 he studies PhD in music science. He won many international awards as a composer and in 2005 Dallas Records issued his CD “Bilder und Erinnerungen“ containing only his compositions. 2007 Dallas Records issued his CD “Contrabasso di Bravura“. His compositions have been performed in USA, Canada, Japan, Republic of China, Taiwan, France, Poland, Hungary, Great Britain, Italy, Germany, Switzerland, Czech Republic, Norway, Sweden, Israel, Spain, Croatia...