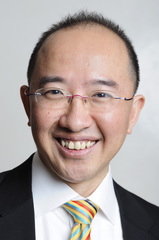 Jiun is recognized as one of the most sought-after pianists in the world of contemporary music. For the past few years, Jiun has been very busy promoting contemporary music in the Far East, as well as introducing and premiering the works of young Asian composers. Described by the BBC Radio in UK as “A Marvellous Ambassador for 20th Century Music”, his great talent became abundantly apparent when he began his musical studies at the age of four in Malaysia and later at the Royal Academy of Music, Guildhall School of Music and Drama and Birmingham Conservatoire in UK with Frank Wibaut, Andrew Ball, James Gibbs and Michael Young. Jiun graduated from the Royal Academy of Music with the highest award and honors and was the very first overseas student to obtain a First Class Honors from the Birmingham Conservatoire. Jiun was one of BBC Radio Three Young Artists and South Bank Centre Young Artists. He was a prize-winner at many international competitions including International New Music Competition in Italy and Royal Overseas League in the UK. Jiun has worked with and has premiered the works of many international leading composers including George Crumb, Ligeti, Toru Takemitsu and Schnittke. He has performed at major festivals including George Crumb Festival in Prague, Messiaen Festival, Ligeti Festival and Schnittke Festival in London. Jiun has performed in more than 30 countries and has broadcasted for over 40 radio stations in the world.