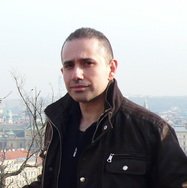 Graduated in piano with full honours from the Conservatory of Bologna, he went on specializing at Accademia Nazionale Santa Cecilia in Rome. Artists as Kostantin Bogino, Boris Bekhterev, Rocco Filippini, Alexei Kornienko, Alexander Lonquich, Vladimir Ogarkov and Paul Badura Skoda have had a major influence on him as a musician. From 2000 to 2005 he gave concerts in duo with violist Antonello Farulli. As a soloist, he performed in prestigious Italian venues such as Auditorium Santa Cecilia – Parco della Musica in Rome, Teatro “Luciano Pavarotti” in Modena, Teatro Comunale in Bologna, “Sala Bossi” in Bologna. Involved in the divulgation of contemporary music, he is dedicatee of several works which he gave the premiere in specialized exhibitions. His discography comprehends works by Brahms, Poulenc, Rosenberg, Rääts, Schoenberg, Takemitsu, Tüür. In addition to his concert activity, he also works as a composer. He studied Composition and Music for Multimedia at the Conservatory of Bologna and Ferrara, graduating with full honours in 2007. Among the most recent works, in 2010 he was commissioned three pieces for the “Symphonic Wind Festival”, he presented Achrome for piano solo at “Festival 5 Giornate” in Milan and, commissioned by the Ensemble 2 Agosto, he composed Ex Tenebris Ad Lucem for ensemble and live electronics which was premiered at XXXV Montepulciano International Art Workshop. In 2011 first performance of “Three Life Sketches” for wind quintet, “Achrome II” for piano solo and “En suspence” for soprano saxophone and piano will be held.