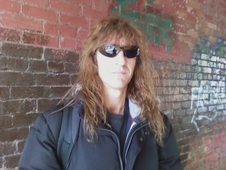 The eclectic career of Mike Barnett has transcended the boundaries of the traditional contemporary musician. In the early 1980’s, art rock ensembles such as Rush and Pink Floyd and classically-influenced European heavy metal bands like Iron Maiden and King Diamond captivated Mike and led him to discover his penchant for the drum set. As a self-taught drummer he began playing with bands that were composing and recording original music and gained extensive experience as a performer, recording artist and composer of heavy metal music. In 1988 Mike co-founded the underground heavy metal ensemble, Phantom Crew. Over the next twelve years the band would go on to record five albums, compose nearly 200 songs and perform at countless venues throughout the eastern United States. Mike earned the Bachelor of Arts degree in 1996 and Master of Arts degree in 1998, both in Music Composition, from the Indiana University of Pennsylvania. In 2004, he earned the D.M.A. in Composition from the University of Colorado. He also served there as a Music Instructor in the Composition/Theory department from 1999 until 2006. Mike currently lives near Pittsburgh and works as a composer, drummer and private music instructor. Dr. Barnett’s compositions include several orchestral works, a piano concerto, a work for wind ensemble, a chamber opera and many chamber works, solo works and songs. His music has been performed by prominent musicians and major ensembles. He has appeared on many rock and metal recordings as both a band member and as a “hired gun” musician and has enjoyed extensive mass media exposure.