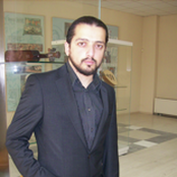 Stavros Hoplaros was born in Cyprus. He received his B.A. in Musicology from the Music Department of the Aristotle University of Thessaloniki in Greece, and his M.M. in Composition from the Bob Cole Conservatory of Music at California State University Long Beach in the United States, where he studied with a Fulbright Scholarship. There, he studied Composition with Dr. Alan Shockley and Dr. Adriana Verdié. Stavros also earned a Diploma in Violin performance (A.B.R.S.M.) as well as Music Theory from the Royal Schools of Music, United Kingdom. Stavros has composed in a wide variety of musical styles and ensembles. His music has been performed at various concerts and events by distinguished artists, including the Eclipse Quartet and the Mo! have Trio. During his stay in Los Angeles, his music has been performed at many concerts nationwide including the 2010 International Computer Music Conference in New York and the Indigenous Instruments concert at the Museum of Latin American Art in Long Beach in 2009. This year, his solo guitar piece Icosabardron will be performed in New York by Kenji Haba. Moreover, Stavros’ electronic piece Panic Attack is included in the 60x60 2011 International Mix by Vox Novus.