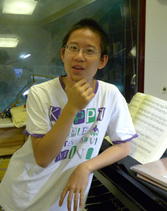 Tian Xie was born in 1995, Beijing, China. He is currently a student of the middle school affiliated to Central Conservatory of Music (CCOM), China. In 2007, Tian Xie was accepted by the Department of Music Theory and Composition of the middle school affiliated to CCOM and supervised by Professor Liu Changyuan. He has achieved great honors with excellent school grades and musical works. In 2008, Tian Xie won the Palatino Composition Competition Award and became the youngest winner then. In 2009, he went to Shanghai Conservatory of Music for academic exchanges as the delegate of his school. In the same year, he was invited to attend the debut concert of the percussion band of his school and his work successfully performed in the National Grand Theatre. He composed the ending music of opening ceremony for the first Beijing Traditional Music Festival. In 2010, he was awarded in National Art School Music Book Stenography Competition and entrusted to compose the interlude for the opening ceremony of the 29th International Society for Music Education (ISME). In 2011, he won the Duet Competition Award in his school and earned the scholarship. Invited by the government of Dunhuang City, he composed for the Singing Sands Mountains and Crescent Spring, which is a famous 5A scenic spot.